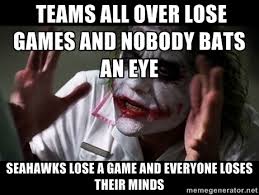 My office was quiet for most of the morning today, just one non-fan who rambled on about how we weren’t robbed we gave it away. Psssshhhhhhhhhh. Just be quiet, dude, and let us wallow in silence…we aren’t ready to talk about it. We’ve been on a Hawks high for a couple of years now…this loss was a big pop to our winner bubble. Our entire identity has been shaken…we are the CHAMPIONS…not the losers! Now what? For a new fan like myself…I didn’t get interested in football until the Seahawks started kicking a$$ and taking names later…its been devastating. I couldn’t help but get caught up in the #gohawks contagion. I’m not used to losing…I’ve only known wins (two glorious seasons of being the big bad team to beat)…I know, I know, stop whining. I guess what I’m trying to say is chins up Hawks fans…we’re still in this together and we still love our boys. We can’t stop the crazy infectious universal good vibes that have built over the last couple of years…we’ve come this far so why not next year? Maybe we didn’t make #1 this year but #2 ain’t so bad either. GO HAWKS!

It's Prime Rib Friday at Magills starting now til sold out! Clam Chowder is also the soup of the day. Tonight get $2 OFF prime rib dinner w mention of post or text! 12/27/19. #tgif #friday #primerib #pascowa #magills
It’s that time to call in & order your holiday dinners to-go! Turkey or Ham dinner feeds up to 5 people with all the fixings! Full menu & pricing link in bio. Call in and order with at least 48 hours notice (509) 547-6448. Don’t forget your gift cards- stocking stuffer sale thru Dec 31st #hohoho #merrychristmas #christmasdinner #holidaydinnerstogo #magills
Is there any better lunch than our Philly cheesesteak with tots and maybe a side of Mac n cheese? #phillycheesesteak #magillspasco #macncheese
Gift Card Sale is on at Magill's! Stop by have some delicious food & pick up your gift cards at a special price now thru December 31st! Purchase a $100 gift card receive $20 extra, buy a $50 get $10 & with a $20 gift card receive $5. Happy Small Business Saturday! #giftcardsale #hohoho #stockingstuffers #letseat #magillspasco #pascowa
Cranberry pancakes are our pancake flavor of the month!!! #feelingfestive #cranberry #pancakes #pancake #comfortfood #breakfast #eatlocal #brunch #richland #richlandwa #kennewickwa #kennewick #pasco #pascowa #tricitieswa #tricities #tri #pnw #wa #easternwa #
It's that time of year!! Time to order your holiday meals & Magill's has just what you need! Place your order for either a Turkey Dinner or Ham Dinner that feeds up to 5 family members. Or you could order both! (Slide to view menus) Meals are available for pickup between Nov 20th & Jan 1st, 2020. Pls order 48 hours in advance of your pick-up time/date. Orders: 509-547-6448 . . #gobblegobble #magillspasco #pascowa #thanksgivingdinner #christmasdinner #newyearseve #letseat